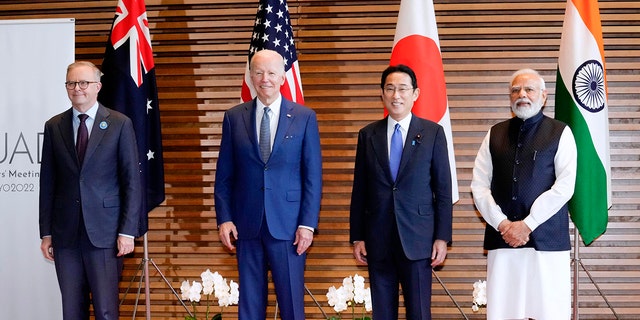 “Japan and Australia share a common position on the need to balance the power of China in the Indo-Pacific region, and we actually have for years,” former Australian Foreign Minister Alexander Downer told Fox News Digital. “[China] under Xi Jinping has become incredibly aggressive and has tried to dominate the region, and that will completely destabilize the region if they do so. We have to make sure China understands we’re happy to work with China and sell to China, but we’re not going to be bullied by China.”

The U.S. faces a difficult and complex effort to check China’s regional ambitions in the Indo-Pacific. Officials previously told Fox News Digital that the U.S. relies on overlapping bi-lateral treaties to create a similar cooperation that the majority of Europe utilizes via NATO.

Downer argued that it is best to operate from the assumption that China’s political system “won’t change between now and when I die.”

America’s most reliable form of deterrence remains the Quadrilateral Security Dialogue (or QUAD) between the U.S., Japan, Australia and India. The QUAD does not carry the same military commitments as NATO, but China decried it as an “Asian NATO” all the same.

TAIWAN WARNS CHINA IT HAS A MISSILE CAPABLE OF STRIKING BEIJING

“The QUAD came out of what we originally called the trilateral security dialog, which was with the United States, Australia and Japan, and India has been added into it by the Japanese, actually, and very sensibly,” Downer explained. “Japan has been a very, very reliable ally in the Indo-Pacific region actually for Australia, and equally for the United States.”

Ambassador Mikio Mori, Consul General of Japan in New York, explained to Fox News Digital that other than its treaty alliance with the U.S., Japan has no single “best” ally in the region, instead relying on a mosaic of partnerships with different partners fulfilling different roles.

But the U.S. sees the relationship between Japan and Australia as a critical component of its China deterrence policy in the Indo-Pacific. Former Japan officer director at the State Department Kevin Maher told Fox News Digital that “putting aside the U.S.,” Australia is “clearly” Japan’s most important relationship.

He touted Japan’s role as leading the region in regarding “awareness of China,” but acknowledged that both Australia and Japan have taken on that duty together.

AUSTRALIA SAYS CHINA INTERCEPTED MILITARY PLANE OVER SOUTH CHINA SEA, FORCING IT TO RETURN TO BASE

The Chinese Belt and Road Initiative, through which Beijing invests in smaller developing nations, has helped China secure influence over “second-tier and third-tier” countries” important to the supply chain, particularly for “military areas, cyber hacking and acquiring companies.” Beijing even famously cut Japan off from rare earth metal resources as alleged retaliation over a dispute regarding fishing boats and waters in 2010. Japan at the time had grown almost entirely dependent on China for these metals.

Japan has since then worked to expand its military capabilities, which the U.S. government “has welcomed very much.” Japan currently boasts one of the largest expenditures on their military, spending around $49 billion per year – seventh-most, putting it ahead of Russia and South Korea but behind the U.K. and Germany.

“In 2015, the then-prime minister changed their fundamental policy to allow for what’s called collective self-defense,” Maher explained. “Up until then, the operational planning … was very restricted because they could only do what’s called individual self-defense, which means they were limited purely to actions to defend Japan.”

The “collective defense” measure qualifies in situations in which Japan faces an “existential crisis,” defined in Article 2 of its constitution as “an armed attack against a foreign state that is in a close relationship with Japan occurs, and, as a result, threatens Japan’s survival.”

“That’s a direct attack on Japan, for example, the Taiwan Strait scenario, or a Korean Peninsula scenario,” Maher said. “So there’s a lot more combined training going on and combined planning going on between the U.S. and Japan.”

REP. TURNER: BIDEN ADMIN SHOULD BE ‘VERY CONCERNED’ ABOUT CHINA’S WARNING OVER TAIWAN

The largest regional unknown remains India’s stance and alignment in the region: Downer raised concerns over India’s position, saying that it is “still has quite a close relationship with Russia.”

“I don’t see India as an ally,” Downer said. “I see it in the way that I would say that obviously, the United States is our ultimate ally, but I would see Japan as pretty much akin to an ally. India is a like-minded democracy – that’s how I would see India,” he added, but admitted that “on the China issue, India has been pretty solid politically.”

“I think we probably feel their relationship with China and with Russia is a function of history, which isn’t going to change very quickly,” Downer said, adding that it remains important to “keep India on our side in terms of dealing with the aggression of Xi Jinping’s regime.”

Downer believes that Australia and Japan must continue to build coalitions in the region, such as with Singapore and with Indonesia, who he believes can one day “dominate the region.”

Those alliances would add to an already “huge amount” of military force available in the region, with both Australia and Japan boasting considerable support for U.S. military bases. Should China try to make a more aggressive move in the region – such as trying to invade Taiwan – Downer believes the current alliances and military capabilities could rebuff the effort.

“If they tried to take Taiwan, well, it could be fantastically difficult and incredibly expensive in terms of lives lost and equipment destroyed and the impact that would have on it’s on China already,” he said.

Come Join us NOW- Sunday – Livestreaming. Link is Below