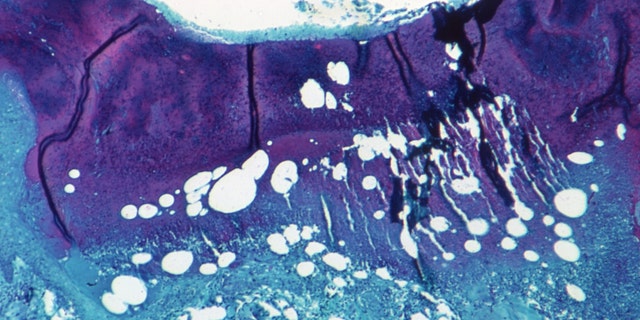 The monkeypox virus has spread to 20 U.S. states and the nation’s capital.

Thus far, 113 infections have been reported, with the majority in California, New York, Illinois and Florida.

New Jersey’s Department of Health announced its first probable case on Monday and Missouri officials identified a potential case in a Kansas City resident over the weekend.

Other locations are reporting monkeypox and orthopoxvirus cases in the single digits, according to the Centers for Disease Control and Prevention (CDC).

Under a magnification of 50X, this image depicted a section of skin tissue, harvested from a lesion on the skin of a monkey, that had been infected with monkeypox virus. The specimen was obtained on day-13 of the rash development.
(CDC)

There are now more than 35 countries – where monkeypox is not endemic – that have reported outbreaks of the viral disease, as confirmed cases exceed 2,500.

The World Health Organization (WHO) is convening an emergency meeting this week to determine whether the outbreak should be considered a global health emergency.

An image created during an investigation into an outbreak of monkeypox, which took place in the Democratic Republic of the Congo (DRC), 1996 to 1997, shows the hands of a patient with a rash due to monkeypox, in this undated image obtained by Reuters on May 18, 2022.
(CDC/Brian W.J. Mahy/Handout via REUTERS)

The United Nations (UN) health agency said people with monkeypox could be infectious for up to four weeks and has advised those infected to isolate themselves until they have fully recovered.

Although the majority of new monkeypox cases have been seen in gay or bisexual men, experts caution that anyone is at potential risk.

Monkeypox on a child in Nigeria
(Credits: Nigeria Centre for Disease Control via WHO)

The disease is commonly found in parts of central and west Africa.

Monkeypox, which is related to smallpox, has milder symptoms.

Some of those symptoms include fever, chills, rash and aches, before lesions develop.

Reuters and The Associated Press contributed to this report.

Julia Musto is a reporter for Fox News Digital. You can find her on Twitter at @JuliaElenaMusto.

Teachings from our Chat Room with Levi – Failing at Grace: He Died Suddenly