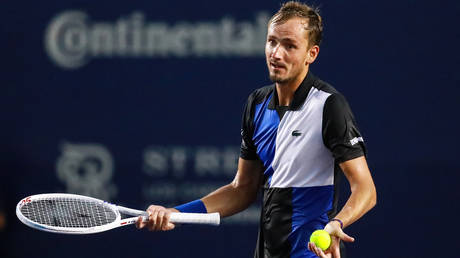 The US Open permitted Russian players to enter after careful consideration

US Open chiefs held high-level discussions about banning players from Russia and Belarus from competing in this year’s even but ultimately opted against following the position established by Wimbledon – and instead will arrange a fundraising exhibition aimed at providing aid for those affected by the conflict in Ukraine, according to The New York Times.

The onset of Moscow’s military operation in Ukraine has had led to blanket bans placed upon Russian athletes by numerous sporting federations, although tennis has largely allowed players from the country to compete under neutral status.

The impact of this has been felt in a wide array of different fronts, but tennis has proved to perhaps be the most potent sporting platform on which to express sentiment related to the conflict.

Wimbledon – arguably the most prominent Grand Slam on the annual tennis calendar – proved an exception, however, as it prohibited Russians and Belarusians from playing in London for fear of handing the Kremlin what it saw as a PR coup should a Russian claim the famous trophy (ironically, the women’s event was won by Russian-born Elena Rybakina, who was playing in the colors of Kazakhstan).

This proved detrimental to the tournament’s rankings structure, after the ATP and WTA revealed rankings points wouldn’t be awarded due to Wimbledon not having a full field of players.

This stance also eliminated the world’s number one men’s player, Daniil Medvedev, before the first serve of the opening round. The same went for Aryna Sabalenka, the female Belarusian star who was a semi-finalist in 2021.

But while Wimbledon’s stance was a controversial one, it won’t be so at Flushing Meadows.

The final Grand Slam of the year, which begins later this month, held discussions, per The New York Times, about following Wimbledon’s lead and banning Russians and Belarusians, which would include casting aside last year’s men’s singles champion, Medvedev, but after what was described as “intense and emotional” talks, the decision was made to allow the event to proceed with a full compliment of players (so long as they’re vaccinated, but that’s another story).

The report states that this decision was made largely because they were not under the same type of pressure from the US government to do so as had been placed on Wimbledon by UK officials.

It was also argued that permitting Russians and Belarusians to play the US Open could supposedly lead to opportunities to unite players from those countries with their Western peers in messaging to speak out against the military operation in Ukraine; even for some of the more high-profile among them to participate in a planned exhibition match to raise humanitarian funds to be sent to Ukraine.

US Open tournament director Stacey Allaster is understood to have asked Victoria Azarenka, one of Belarusian tennis’ top stars, to play a fundraising exhibition on August 24 – Ukraine’s Independence Day – at the Billie Jean King National Tennis Center, where it is hoped they will raise around $2 million to fund relief efforts.

“She said, ‘This is a player choice, and I want to play,’” according to Allaster.

Azarenka has previously been critical of the Wimbledon ban, saying at the time that it was “a big opportunity to show how sports can unite.”

“I think we missed that opportunity, but I hope we can still show it,” she added (however The Times notes that Azarenka declined to comment further when contacted by the publication).

Allaster added, though, that a player’s right to express themselves as they see fit must remain unimpeded.

“We don’t want to put undue pressure on any athlete,” she said. “We are going to respect and support any player’s decision.”

In permitting Russian and Belarusian players to compete, the US Open will follow the stance of the French Open back in May and June, which cleared players from the two nations to play under neutral status.

‘The White House used hate. They used us, our blood,’ Orthodox Jews say they were excluded from Biden’s hate crimes summit at the White...