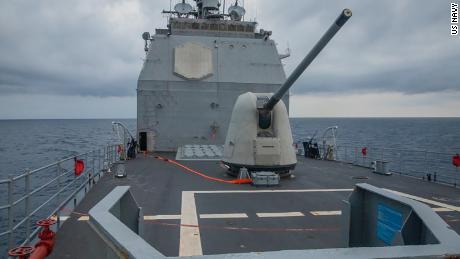 The guided-missile cruisers USS Antietam and USS Chancellorsville were on Sunday making the voyage “through waters where high seas freedoms of navigation and overflight apply in accordance with international law,” the US 7th Fleet in Japan said in a statement.

It said the transit was “ongoing” and that there had been “no interference from foreign military forces so far.”

“These ships (are transiting) through a corridor in the strait that is beyond the territorial sea of any coastal state. The ships’ transit through the Taiwan Strait demonstrates the United States’ commitment to a free and open Indo-Pacific. The United States military flies, sails, and operates anywhere international law allows,” it said.

John Kirby, a spokesperson for the National Security Council, told CNN’s Jim Sciutto on Sunday that the two US Navy warships transiting the Taiwan Strait sent a “very clear” and “very consistent” message that “the United States military will sail, fly and operate wherever international law permits us to do so.”

“This was planned long ago,” Kirby added.

The Chinese military’s Eastern Theater Command said it was monitoring the two ships, maintaining a high alert and was “ready to thwart any provocation.”

The strait is a 110-mile (180-kilometer) stretch of water that separates the democratic self-ruled island of Taiwan from mainland China.

Beijing claims sovereignty over Taiwan despite China’s ruling Communist Party never having controlled the island — and considers the strait part of its “internal waters.”

The US Navy, however, says most of the strait is in international waters.

The Navy cites an international law that defines territorial waters as extending 12 nautical miles (22.2 kilometers) from a country’s coastline and regularly sends its warships through the strait in what it calls freedom of navigation operations, including recent voyages by the guided missile destroyers USS Benfold and USS Port Royal.

“The frequent provocations and showing-off by the US fully demonstrate that the US is the destroyer of peace and stability in the Taiwan Strait and the creator of security risks in the Taiwan Strait,” Col. Shi Yi, spokesman for the People’s Liberation Army’s Eastern Theater Command, said after the Benfold’s transit on July 19.

Beijing has ramped up military maneuvers in the strait — and the skies above it — following the visit by Pelosi to the island earlier this month.

Within minutes of Pelosi landing in Taiwan on August 2, the PLA announced four days of military exercises in six zones encircling the island.

The maneuvers included launching ballistic missiles into waters around Taiwan, numerous Chinese warships steaming in the Taiwan Strait and dozens of PLA warplanes breaching the median line — the midway point between mainland China and Taiwan that Beijing says it does not recognize but had largely respected.

Since those exercises officially ended, PLA warplanes have continued to cross the median line daily, usually in double-digit numbers, according to statistics from Taiwan’s Defense Ministry. From August 8, the last of the four days of drills announced the night Pelosi landed in Taiwan, through August 22, between five and 21 PLA aircraft crossed the median line each day.

In July, the month before Pelosi’s trip, Chinese warplanes crossed the median line just once, with an unspecified number of jets, according to Taiwan’s Defense Ministry.

In addition, Taiwan reports between five and 14 PLA warships have been seen in the waters surrounding Taiwan.

The PLA’s exercises have been continuing this week, part of what is normally a busy season for Chinese drills.

China’s Eastern Theater Command said on Friday it had conducted “joint combat-readiness security patrols and combat training exercises involving troops of multiple services and arms in the waters and airspace” around Taiwan.

That announcement came after US Sen. Marsha Blackburn, a Tennessee Republican who sits on the Senate Armed Services Committee, became the latest member of Congress to visit Taiwan defying pressure from Beijing, saying, “I will not be bullied by Communist China into turning my back on the island.”

In tweets Friday morning, the US senator, who does not represent the Biden administration, reiterated her support for Taiwan.

“I will never kowtow to the Chinese Communist Party,” she said in one. “I will continue to stand with the (Taiwanese) and their right to freedom and democracy. Xi Jinping doesn’t scare me,” she added later, referring to China’s leader.

Nicholas Burns, the US ambassador to China, told CNN last week that Beijing’s response to the Pelosi visit to Taiwan has been “an overreaction.”

“We do not believe there should be a crisis in US-China relations over the visit — the peaceful visit — of the speaker of the House of Representatives to Taiwan … it was a manufactured crisis by the government in Beijing,” Burns said in an interview from the US Embassy.

It is now “incumbent upon the government here in Beijing to convince the rest of the world that it will act peacefully in the future,” the ambassador said.

“I think there’s a lot of concern around the world that China has now become an agent of instability in the Taiwan Strait and that’s not in anyone’s interest,” he said.

Other US officials had said Washington would not be changing the way the US military operates in the region.

“We’ll continue to fly, sail, and operate where international law allows, consistent with our longstanding commitment to freedom of navigation, and that includes conducting standard air and maritime transits through the Taiwan Strait in the next few weeks,” Kurt Campbell, US President Joe Biden’s coordinator for the Indo-Pacific, told reporters at the White House on August 12.

Chinese Ambassador to Washington Qin Gang said last week that the US transits only intensify tensions.

“I do call on American colleagues to exercise restraint, not to do anything to escalate the tension,” Qin told reporters in Washington. “If there’s any move damaging China’s territorial integrity and sovereignty, China will respond.”