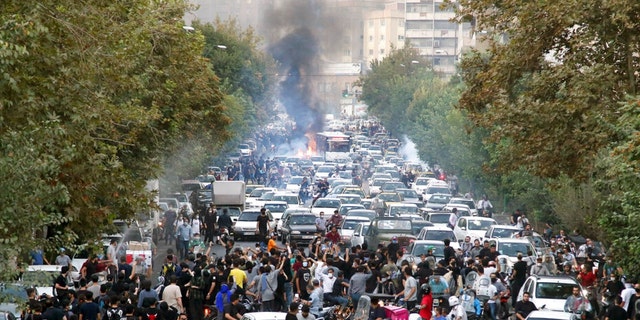 The United States sanctioned several top Iranian officials for censorship and violence against protesters, who have taken to the streets in recent weeks following the death of a 22-year-old woman while in custody of the regime’s morality police.

The new sanctions target seven Iranian leaders, including the country’s Minister of the Interior, Ahmad Vahidi, as well as Iran’s Minister of Communications, Eisa Zarepour, according to the Treasury Department’s Office of Foreign Assets Control.

FILE – Protesters chant slogans during a protest over the death of a woman who was detained by the morality police, in downtown Tehran, Iran, Sept. 21, 2022.
(AP Photo, File)

Protests have erupted in Iran over the past three weeks following the death of Mahsa Amini, who was arrested by the so-called morality police for allegedly wearing a hijab improperly.

Iranians have been cut off from the internet and social media as police violently crack down on protests in the streets.

FILE PHOTO: A police motorcycle burns during a protest over the death of Mahsa Amini, a woman who died after being arrested by the Islamic republic’s “morality police”, in Tehran, Iran September 19, 2022.
(West Asia News Agency via REUTERS)

Dozens of Iranians have been killed during the protests. On Sept. 30, at least 66 people, including children, were killed when security forces opened fire in the city of Zahedan, which is in the Sistan and Baluchistan province, according to Amnesty International.

“Amid an epidemic of systemic impunity that has long prevailed in Iran, dozens of men, women and children have been unlawfully killed in the latest round of bloodshed,” Amnesty International Secretary General Agnes Callamard said in a statement.

The U.S. sanctions could threaten the revival of the Iran nuclear deal, which U.S. officials have been negotiating with Iran through the European Union for roughly a year-and-a-half.