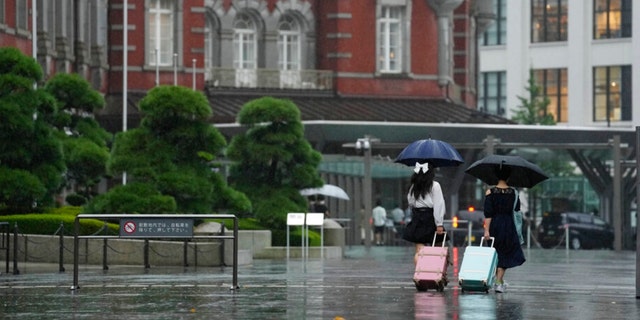 U.S. officials are touting bioethanol in Japan, which trails other nations on using the green fuel made from corn and other crops.

The U.S. is a top grower of corn, and an embassy official said the U.S. would be “a reliable supplier” of bioethanol.

Cooperation on biofuel between the U.S. and Japan is part of a larger partnership between President Biden and Prime Minister Fumio Kishida in defense, technology and climate change.

A workshop Wednesday in Tokyo provided an opportunity for Japanese government, academics and industry representatives to learn more about bioethanol from American experts.

Women walk out of the Tokyo train station in the rain Tuesday, Sept. 20, 2022. A deadly tropical storm that dumped heavy rain as it cut across Japan moved into the Pacific Ocean on Tuesday, paralyzing traffic and leaving thousands of homes without power.
(AP Photo/Hiro Komae)

Bioethanol can be fuel for vehicles and planes and offers a cleaner alternative to petroleum.

MARC THIESSEN: IT’S A ‘DIRTY LITTLE SECRET’ DEMOCRATS WANT HIGH GAS PRICES TO ‘GET US TO GIVE UP FOSSIL FUELS’

When compared to countries like the U.S and Brazil, where bioethanol is commonly used, Japan is playing catch-up. The need for alternative fuels has grown more pressing with the war in Ukraine and worries about rising oil prices and climate change.

A local resident walks next to a house destroyed in a Russian shelling in Kramatorsk, Ukraine. Two American were reportedly killed in the country.
(AP Photo/Andriy Andriyenko)

Japan imports almost all their oil, as well as its bioethanol. Japan has denounced the Russian invasion of Ukraine, but has yet to eliminate its Russian oil imports, as it has pledged.

“Japan has set an important goal to be carbon neutral by 2050,” Yuki Sadamitsu, director-general of the Natural Resources and Fuel Department at Japan’s Ministry of Economy, Trade and Industry, told the workshop.

Boosting bioethanol use will be crucial in realizing that goal, Sadamitsu added.

Forsberg noted Japan ranked among the lowest in the world in its rate of blending ethanol with gasoline, at about 1.7%. Forsberg urged Japan to boost that to 3%, noting there was “ample room to grow.”

In this Oct. 5, 2021, file photo, cargo vessels are seen anchored offshore, sharing space with oil platforms, before heading into the Los Angeles-Long Beach port. A group of environmental organizations is demanding the Biden administration suspend and cancel oil and gas leases in federal waters off the California coast after a recent crude oil spill. The Center for Biological Diversity and about three dozen organizations sent a petition Wednesday, Oct. 20, 2021, to the Department of the Interior, arguing it has the authority to end these leases.
(AP Photo/Eugene Garcia, File)

The U.S. can show how to make the blend while maintaining vehicle compatibility and discuss costs and benefits, as well as providing a steady supply, he said.

PETE BUTTIGIEG: WE WILL BE PROUD WHEN AMERICA ‘LEADS THE WAY’ INTO EV FUTURE

“As Japan updates its transport biofuel policy for the next several years, we look forward to sharing our experience of expanding the use of biofuels,” said Forsberg.