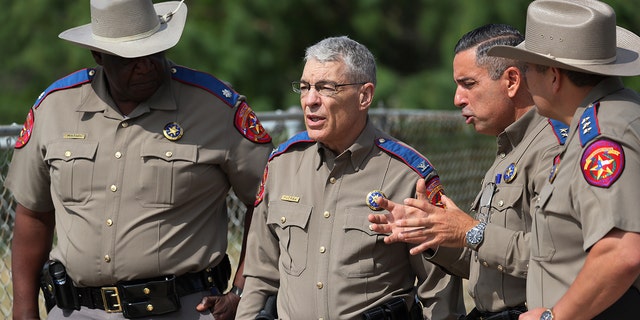 Texas police responded to a major accident in Uvalde Wednesday that involved three vehicles, including one believe to be carrying several illegal immigrants, according to police. Uvalde is about 60 miles from the Texas-Mexico border at Eagle Pass.

Police told local reporters that two people died and 10 others were injured in the crash.

Uvalde Police Department Chief Daniel Rodriguez told a local station that one of the vehicles is believed to have been carrying illegal immigrants, according to the Associated Press.

“A vehicle was observed by U.S. Border Patrol speeding eastbound on Highway 90,” Rodriguez said, “and what is suspected to be a loaded vehicle with undocumented aliens.”

Rodriguez said the truck carrying the migrants crashed into a tractor-trailer and another car in downtown Uvalde.

Everyone who was killed or injured was in the pickup truck, Rodriguez said.

While Border Patrol agents identified the speeding vehicle, they were not involved in any kind of chase or pursuit, according to a statement from the Border Patrol Union in Del Rio Sector. The union posted a thread on Twitter explaining the series of events that led up to the crash, starting with a Border Patrol agent who saw the “speeding truck but was too far away to be able to investigate, so he asked that Uvalde Police be notified.”

“Any reports from the Uvalde Mayor or Uvalde PD that BP agents were pursuing were premature because they were making assumptions based on incomplete info. All available info indicates that BP agents were in the area, but they were not involved in a pursuit of this vehicle,” the statement continued. “So far, no one knows why the driver was driving so recklessly before he ever saw police. This is yet another terrible event in Uvalde, made worse by bad info being spread in the community by people who should know to wait for at least some form of an investigation to happen.”

Uvalde Mayor Don McLaughlin said accidents like the one in Uvalde Wednesday are commonplace and could be stopped if the Biden administration would tighten immigration rules.
(Reuters/Veronica G. Cardenas)

Mclaughlin said accidents like this and others all over South Texas are a direct result of the Biden administration “turning a blind eye” to the unprecedented number of people entering the country illegally.

“This administration keeps saying the border is secure and locked up, but it’s so far from the truth,” McLaughlin said. “Two illegal immigrants lost their lives. They could have been citizens. It’s just a tragedy. And this administration has the ability to stop this if they want, and, for some reason, they have no desire to.”

The Uvalde Police Department did not respond to requests for comment from Fox News Digital.

The Texas Department of Public Safety is investigating the crash.

The Associated Press contributed to this report. This is a developing story, check back for any updates.

Max Thornberry is an associate editor for Fox News Digital. You can reach him at Max.Thornberry@fox.com and on Twitter @Max_Thornberry