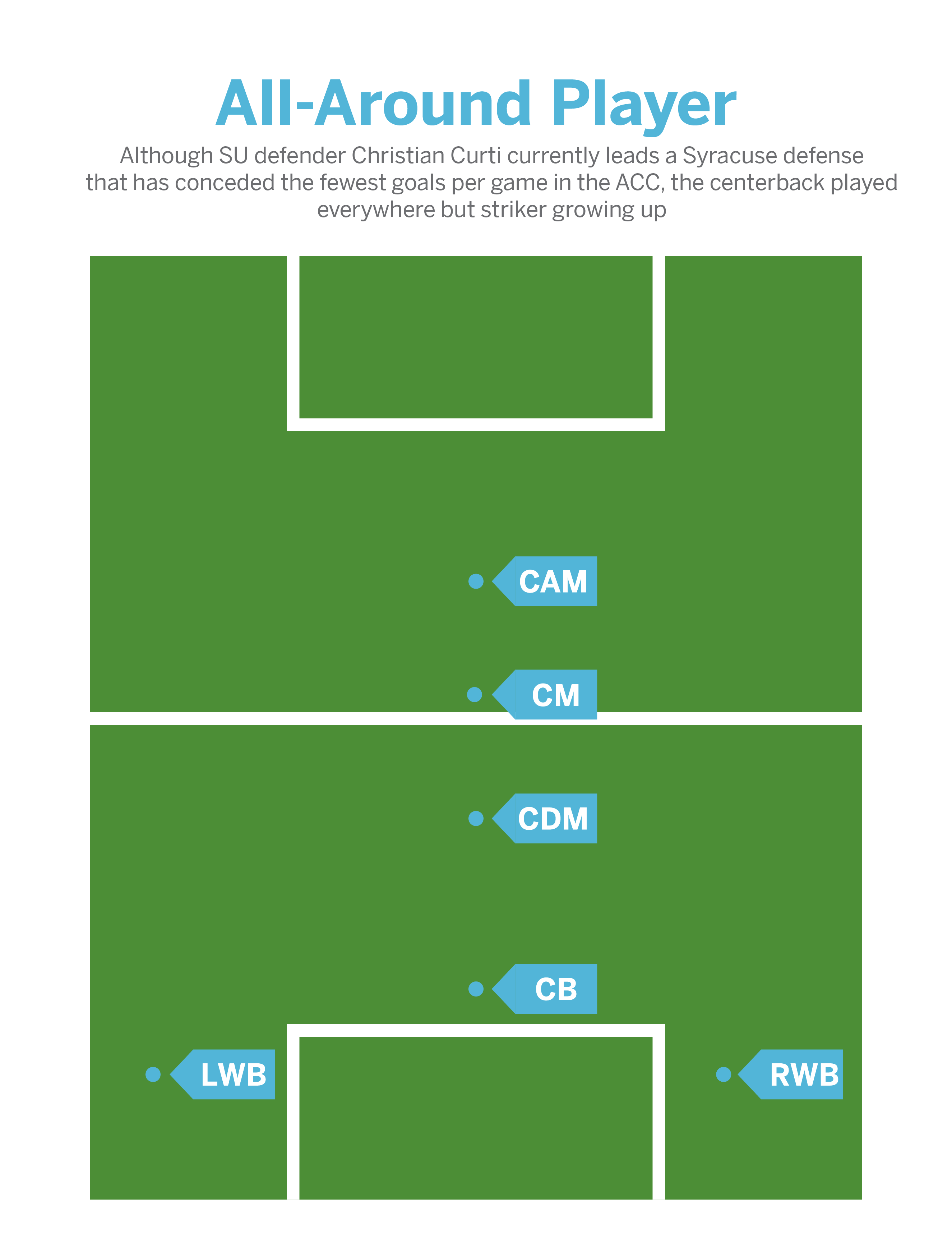 Get the latest Syracuse news delivered right to your inbox. Subscribe to our sports newsletter here.

Christian Curti has never stayed in a set position. He switched between seven different roles in high school – everywhere but striker. When he was recruited out of high school and entered the transfer portal after two years at Marist, coaches still had questions about his true position.

After Amferny Sinclair went down with an injury last week, Syracuse head coach Ian McIntyre had to find a way to fill the void in defensive midfield. Sinclair had played every minute of the season and was a catalyst in Syracuse’s rise from unranked to No. 3 in the nation. McIntyre tapped Curti, who normally serves on the left flank of Syracuse’s back three, to take Sinclair’s spot.

Now, in his second season with No. 7 Syracuse, Curti is arguably one of Syracuse’s best players, McIntyre said. He hasn’t missed a minute all season and his versatility has been as valuable as his defensive chops themselves. Led by Curti, Syracuse’s defense has conceded the fewest goals per game in the Atlantic Coast Conference. And following Sinclair’s injury, he’s back in the position he played in Syracuse’s final two games last year.

In high school, Curti played for Vaughan SC’s B team in the greater Toronto area, but when the squad was disbanded, he had nowhere to go.

His father convinced club director Patrice Gheisar to let Curti practice with the 1999 squad, even though he was born in 2000. Gheisar didn’t promise Curti much playing time, but Curti filled in wherever he could. While bouncing between both squads, he gained experience in positions ranging from center back to attacking midfielder.

Just before the Disney showcase — one of the most popular recruiting events for college coaches in North America — Vaughan’s starting center back tore his ACL. Curti stepped in for him.

In his first season at SU last year, Curti started all but two games. But this season, he’s brought his play to a new level, McIntyre said. After clean sheets versus Iona and Penn State in the first week of the season, Curti was named ACC Defensive Player of the Week.

“He was good his first year,” McIntyre said. “He made the transition and he’s been arguably one of our top players from the moment he stepped back on campus for preseason.”

Curti played at Vaughan this summer and said being home for the summer was a large factor in his improved play this year. He said the biggest difference between last year’s defensive unit and this year’s is how the squad is stopping teams before they can cause problems. The Orange play fast, and relentlessly press the opposition as soon as they lose the ball.

“Last year we would kind of need something special from someone last second to stop a goal,” Curti said. “This year we don’t even give them the opportunity to get in that position,” Curti said.

And if opponents make it past the Orange midfield, SU’s experienced back three of Curti, Buster Sjoberg and Olu Oyegunle bullied opponents off the ball.

“We have so many quality defenders so it’s hard to get past,” Curti said. “God forbid you get past that, you have Russell (Shealy) to get past.”

Against Virginia, Curti stepped up from his spot in the backline to play in the defensive midfield with Jeorgio Kocevski. But Kocevski was sent off in the 22nd minute, putting Curti in an even more important role with Syracuse down to 10 men. For Curti, it was a role he was used to.

“I’ve always been versatile,” Curti said. “It’s a big asset to have.”