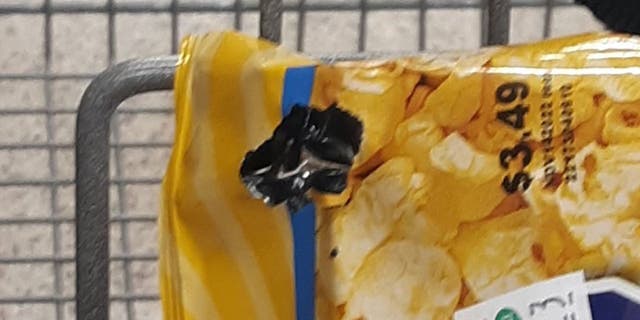 A Virginia woman’s trip to the grocery store took an unexpected turn on Thursday when she was startled by a snake in her shopping cart.

Kimberly Slaughter was inside a Shoppers Value store in Lunenburg County, Virginia when she saw what she believed to be mouse feces inside of her shopping cart, WTVR reported.

“I was like, I’m not getting that bag,” Slaughter told the news outlet. “So I put it on the bottom shelf because there was already mouse poop covering the bottom shelves.”

Slaughter, who said she noticed rodent traps on the bottom shelf, went to grab another grab of popcorn and saw that it had a small hole in the top right corner.

When Slaughter went to put the bag in her cart to take up to the front because it couldn’t be sold, she discovered a snake inside.

“The thing had popped out, and you know, I was like, oh, well, hi!” Slaughter said.

She explained that when she brought the cart to the front of the store the snake emerged from the bag and slithered around before returning inside the bag.

The head of a snake popping out of a bag of popcorn inside a Virginia grocery store.
(Kimberly Slaughter )

“It was the full length of the cart,” Slaughter, who says friends told her she encountered a rat snake, said. “It had prime real estate though.”

Slaughter, who has a baby at home, told the outlet she worries about what would have happened if the snake had made it back home with her.

“I have a baby, and he is just starting to walk,” Slaughter said. “So imagine if he was a little bit older, or if my niece had gone and been like, ‘hey, I want some popcorn’ and grabbed that bag and it bit her. It’s not safe. It’s not healthy.”

The store manager, Brian Stanley, said the store is investigating.

Believers and the Kingdom of God – John MacArthur

Inside a Flat Earth convention, where nearly everyone believes Earth isn't...

Believers and the Kingdom of God – John MacArthur

Inside a Flat Earth convention, where nearly everyone believes Earth isn't round

Automatic Bot - February 6, 2023 0
Kosovar Prime Minister Albin Kurti has called on Western powers not to pressure his tiny Balkan country into accepting a contentious association of...
Go to mobile version