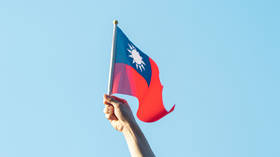 The US has deployed two of its warships to the Taiwan Strait in a first such mission since the controversial visit of US House Speaker Nancy Pelosi to Taipei, the Navy said on Saturday.

USS Chancellorsville and USS Antietam, which are both Ticonderoga-class guided-missile cruisers, are sailing through international waters in the area, according to a statement from the US 7th fleet.

According to the US 7th fleet, the warship transit is “routine” and “demonstrates the United States’ commitment to a free and open Indo-Pacific”. The statement went on to stress that the mission is being conducted “in accordance with international law”.

The Chinese military has been put on high alert due to the ships’ passage and is ready “to stop any provocations in a timely manner” , Shi Yi, spokesperson for the Eastern Theater Command of the Chinese People’s Liberation Army (PLA), said.

The US Navy’s so-called freedom of navigation operations tend to draw anger from Beijing.


“The frequent provocations and showing-off by the US fully demonstrate that the US is the destroyer of peace and stability in the Taiwan Strait and the creator of security risks in the Taiwan Strait”, Shi stated in July, referring to a similar mission by US forces.

The deployment comes after a string of US lawmaker visits to Taiwan, with the latest taking place on Thursday when US Senator Marsha Blackburn arrived on the self-governed island. Earlier this month, a US congressional delegation consisting of four Democrats and one Republican travelled to Taipei “to discuss US-Taiwan relations, regional security, trade and investment, global supply chains, climate change, and other significant issues of mutual interest.”

All these trips followed an especially inflammatory visit by US House Speaker Nancy Pelosi in early August, which sent relations between Washington and Beijing into a tailspin and triggered massive Chinese military exercises in the area. Beijing perceived a visit by the second person in the line of presidential succession as a violation of the ‘One China’ principle by the highest levels of power in Washington.

The Taiwan Strait, which separates the self-governed island from mainland China, has been a source of military tension since 1949, when Chinese nationalists fled to Taiwan after losing the Civil War to the Communists.

Hotel look: The Jimmy Buffett resort in the Dominican