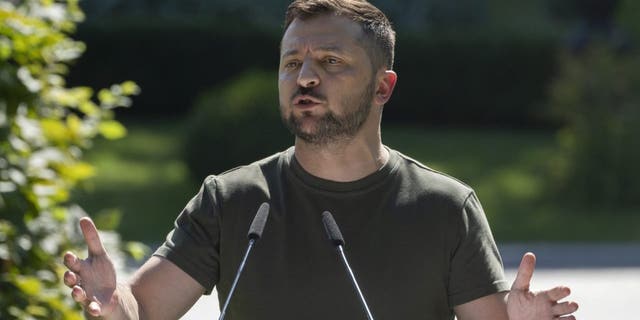 Speaking during an international defense conference held in Denmark, Zelenskyy warned that Russia could cause “the largest radiation accident in history” at the Zaporizhzhia nuclear power plant, which is the largest nuclear plant on the European continent and among the largest in the world.

“In terms of actual consequences, it could be even more catastrophic than Chernobyl,” he said.

Adding that fallout caused by its damage or destruction would be tantamount to “the use of nuclear weapons by Russia, but without a nuclear strike.”

Zelenskyy’s comments follow days of international concern after the plant came under attack over the weekend as shelling fell around the site.

Both Russia and Ukraine have pointed the blame on one another.

Leaders from the G7 have called on Russia to hand control of the nuclear plant – which has already had damage inflicted on critical parts of its complex – back to Ukraine.

U.N. Secretary-General António Guterres expressed his “grave” concern over the continued fighting in the area and called on both sides to cease all military activity around the plant and “exercise common sense and reason” to avoid “catastrophic consequences.”

“Regrettably, instead of de-escalation, over the past several days there have been reports of further deeply worrying incidents that could, if they continue, lead to disaster,” he added in a statement.

Ukraine has accused Russia of using the plant as a “nuclear shield” and posting some 500 Russian soldiers at the site, reported the BBC.

Kyiv has argued that Moscow has turned the nuclear plant into a military base, firing missile strikes from the vulnerable position while knowing Ukraine will be hesitant to fire back in the direction of the nuclear plant.

“Russia has become a terrorist state, and is actually holding nuclear plants hostage, and is blackmailing everyone with a probable disaster,” Zelenskyy said Thursday. “None of us can stop the wind if it carries radiation. But together we are capable of stopping a terrorist state.

“The sooner we stop Russia, the sooner Europe and the world will be able to feel safe again,” he added.

A Russian serviceman stands guard the territory outside the second reactor of the Zaporizhzhia Nuclear Power Station in Energodar on May 1, 2022.
(Photo by ANDREY BORODULIN/AFP via Getty Images)

Zelenskyy called for increased sanctions on Russia and its nuclear program.

The UN has called on both sides to immediately grant the International Atomic Energy Agency access to the Zaporizhzhia nuclear power plant.

The F-Word in Italy

The Kingly Priesthood of the Saints – Charles Spurgeon Sermon Audio